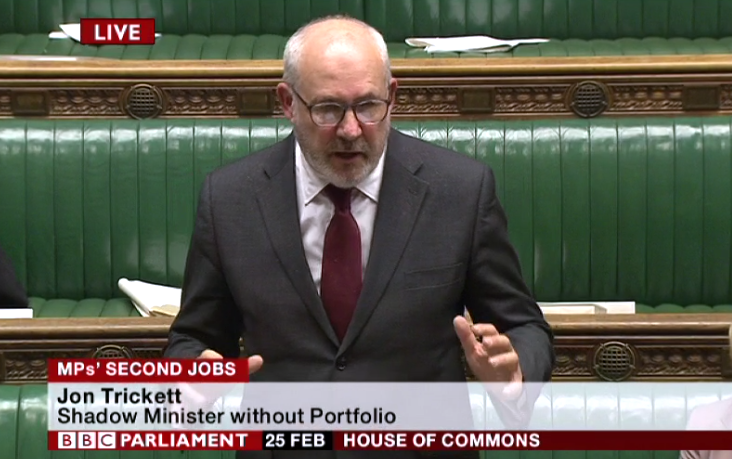 On Wednesday I spoke in Parliament in support of the ban on MP’s second jobs because I believe that MPs should work for the people who elect them.

As MP’s, we owe an oath of loyalty to the country and we are required to serve to the exclusion of all other interests – but the Government blocked our motion 287 votes to 219.

Labour would ban MPs from holding paid directorships and consultancies.

A copy of my full speech is below.

Jon Trickett (Hemsworth) (Lab): This has been an interesting debate, although it has not always been of the highest quality. A number of contributions stay in my mind, but I will not have a chance to deal with them all.

My hon. Friend the Member for Newport West (Paul Flynn) pointed out that £67,000 is a full-time salary and that this is a full-time job. That was a recurring theme. I remind those who say it is not that much that we are in the top decile. Nine out of 10 people earn less than us. My hon. Friend the Member for Heywood and Middleton (Liz McInnes) reminded the House that almost four out of 10 people in her constituency earn less than the living wage.

My hon. Friend the Member for Easington (Grahame M. Morris), who I am sure is on his way back to the Chamber, reminded the House that there are Members of Parliament who are earning £1,000 an hour in addition to their salary. These are staggering amounts of money. The hon. Member for Wells (Tessa Munt) used extravagant but accurate language to describe the horror that many people will feel when they discover how much money is earned by some Members of Parliament.

There were a number of interesting speeches by Government Members, which all boiled down to three arguments. I will deal with those quickly before getting to the point of our motion. There were the loud-and-prouders or topper-uppers, who were in favour of earning more because they felt that, as a result of what they did, they were entitled to a larger salary. They felt that £67,000 was not enough. I will come to that argument in a moment or two.

The Leader of the House said that our proposal was just too complicated and difficult to achieve. I reminded him that it has been done in Washington. In fact, Washington has gone much further than this relatively modest proposal. I am not saying that we should model everything we do on Washington, but it is interesting that the home of free enterprise and buccaneer capitalism has been able to regulate its elected members when the Government suggest that we cannot.

The third argument was that it helps the House to have the experience of people who do things outside. Of course it does. We all do things outside. The issue is remuneration. My hon. Friend the Member for Edinburgh South (Ian Murray) reminded us that he previously had two businesses, and he did the right thing-he closed one down and put the other into hibernation, so that there could be no conflict of interest. The central question is one of remuneration.

Mr Spencer: Will the hon. Gentleman give way?

Jon Trickett: No, I do not have time.

The central issue that our motion is intended to address is the crisis of legitimacy that the British governing elite is experiencing. We encounter cynicism wherever we go, and in the end it will imperil the very foundations of our democracy unless we somehow regain the trust and respect of the British people. The question is, can we respond to a new zeitgeist that is everywhere in our country-one that is more democratic, egalitarian, non-deferential and occasionally even unruly? It is right that it should have all those attributes in the second decade of a democratic century.

Sir Alan Duncan: Will the hon. Gentleman give way?

Jon Trickett: No, I am not going to take any interventions.

If we do not respond to the current mood in the country, we will be lost as a House of Commons. I do not for one minute think that most voters imagine that their elected representatives are somehow superhuman and never make mistakes, and the Leader of the House rightly paid tribute to the two Members who have got themselves into trouble this week. I echo much of what he said. However, voters will judge us on how we respond to our mistakes. We need to show that we have reflected on any errors that we have made and learned the lessons, and that if necessary we will change the rules.

Sir Alan Duncan: On that point, will the hon. Gentleman give way?

Jon Trickett: No, I am not going to take any interventions, because I do not have time.

We need to show that we have learned the lessons and changed the rules, to prevent any repetition of those errors in the future. The Opposition contend that it is a mistake for the House to continue with a set of rules on second jobs that were designed for another era. There simply is not time to spell out all the arguments for our proposition, but I will make two.

First, in an era when Victorian deference and hypocrisy have long ended, and rightly so, it is no longer acceptable for one set of rules to apply to the governing class and another to the rest of the country. That is how it will seem to millions of people if we continue to have a permissive policy on second jobs. After all, there are millions of people-thousands in every one of our constituencies-who work hard and play by the rules, yet are living in poverty. There are millions more who find it hard to pay their bills at the end of the month. After all, the average working person has lost £1,600 a year in salary since this Government were elected. When the people we represent hear the argument, which we have heard today, that an MP cannot live on £67,000 a year-plus an additional £14,000 for a Chair of a Select Committee, incidentally-they will inevitably ask themselves, “What kind of planet do these people live on?”

What about people who are on exploitative zero-hours contracts, who receive no guarantee that they will have a single hour’s work today, tomorrow, this week, next week or next month? Their contracts also prevent them from taking second jobs. How can we explain to them the idea that we should have second jobs? Then there are 1.9 million people who are out of work. How will the Government parties explain to the people in their constituencies who have no job that some of them have six jobs? It is simply impossible to imagine how they can justify it.

Sir Alan Duncan: On that point, will the hon. Gentleman give way?

Jon Trickett: No. The right hon. Gentleman has had his chance and made his speech.

I said that I would develop two arguments. The second relates to who we are here to serve, and it is critical. Every hon. Member, when they first become a Member of the House, swears an oath of loyalty to the country and is required to serve their constituents to the exclusion of all other interests. However, if someone is a remunerated director or a consultant, they have a legal duty to the body corporate that employs them always to act in the financial interests of that corporation. The question that therefore arises in the minds of interested observers is how any hon. Member can reconcile those dual loyalties to the corporation and to the country.

I have previously given the House the example of a paid director of a tobacco company who is also an MP. If a matter of public health concerning restrictions of tobacco sales comes before the House, the perception will arrive in people’s minds that that hon. Member is balancing two interests-those of the person who pays the contract for the directorship, and wider public health. To be blunt, many electors will come to the widely held view that is summarised in a two-word Yorkshire phrase: money talks. The question is not simply about whether an MP has sufficient time to do a second job-although how they find the time is a good question-but about whether there is a conflict between their duty exclusively to serve the public and their employment in the service of a private interest.

The best way to resolve a problem is usually the simplest. We think that the simplest way is to impose restrictions on second jobs, and that is what today’s motion is about. For those reasons, and for many others outlined today, it is time for the House to move on. The Government amendment takes us no further; it is simply an elegant reformulation of the status quo and as such it will not do. Even at this late stage it is possible for Government Members to come through the Lobby, vote with Labour and begin to clean up politics, and I urge them to do so.

Let it be known that if the House rejects the motion today, the Labour party will introduce a new standing order for our MPs to cover these matters in the new Parliament, which is now only a few weeks away. Under those circumstances, let other parties do as they will. The people of the country will judge them.